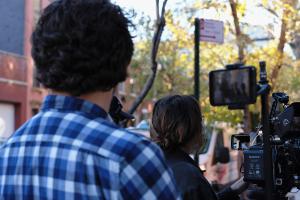 On set of STUPID CUPID in NYC with director Yaroslav Altunin 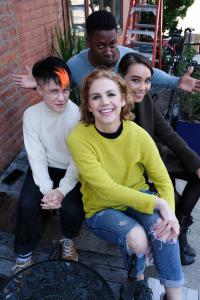 A web series about four best friends seeking to fix modern love with a dating app that takes on a mind of its own.

What do you do when you don't feel the love from the tech industry or dating apps? Make your own.”
— Stupid Cupid

Stupid Cupid, created, co-written, and produced by Hunt (Chronic) and written and directed by Altunin is part of the inaugural class of grant recipients from Made in NY Women in Film and Theatre Fund the centerpiece of a series of initiatives by the City of New York Mayor’s Office of Media and Entertainment (MOME) addressing the underrepresentation of female and female-identifying creatives in film, television and theatre. Stupid Cupid, Season I will be accessible beginning February 14, 2020 through Over-The-Air (OTA) and via 7 different cable carriers in the New York Metropolitan area. It will also be available On Demand via the website, on the NYC Media iOS app, Taxi TV, and on iTunes. For more information on the series and where to watch it, visit www.stupidcupid.us or @stupidcupidus on all social media.

The story: Four best friends attempt to fix modern love by building a dating app that develops a mind of its own.

Impulsive and passionate CEO Alex gets an offer she can't refuse to buy out the app and at the same meeting, discovers her app is, well, pretty stupid. She then seeks out a date using her app. After it ends horrifically, she drinks too much and decides to fix the app herself by deleting a bunch of code. Hilarity ensues when the app starts working better than before, forcing the rest of the team on dates to figure out what's miraculously making the app work better than ever.

These four folks that the tech industry forgot may very well be the worst people tasked with fixing love. Cutie patootie Harper, COO, is dealing with a crumbling marriage that may only be mended by seeing other people. Reed, CFO, thinks he's got the player game down until he meets a con artist. CTO Stevie is overwhelmed with a secret crush and transitioning, so he doesn't bother dating until he has no other choice. And Alex is questioning whether she's on the right track in both her career and love life.

With their launch only a week away, the team is in a race against the clock to save the app, and themselves, before their careers and love lives get deleted. Will they sell? Or will Stupid Cupid take off? Either way, they're on this wild ride together with an app that gives you not what you think you want, but what you truly need.

Yaroslav Altunin (Writer / Director / Editor) is a Russian-born writer and director, raised in a family of dancers and classical musicians in Seattle. After working on feature films, documentaries, and music videos there, Yaroslav moved to Los Angeles to continue screenwriting armed with a BA from Arizona State University and an MFA in Screenwriting from UCLA, Yaro’s script “Absence of Courage” was #1 on the Hitlist last year.

JJ Hawkins (Stevie) Raised in the San Francisco Bay Area and now a transplant to Los Angeles, J.J. has ignored all his prejudices against Southern California to bring queer representation to the world of film and television. He’s a non-gender-conforming trans-masculine kid and he’s here to use his voice for those who can't. You can catch JJ in the recent SonyPlaystation Pilot, “All Rise,” “Two Roads,” “The Red Line,” “NCIS” and more films and theatre performances.

Wayne T. Carr (Reed) has performed on stage at: Guthrie Theatre, Goodman, Yale Rep, Milwaukee Rep, Indiana Rep, Oregon Shakespeare, Utah Shakespeare and many more. He has been seen on TV and Film in: SWAT, Stuck in the Middle and Who's Afraid of the Big Black Wolf. Graduated from Penn State with an MFA in acting.

Joanna Sotomura (Harper) was born and raised in Honolulu, Hawaii. She moved to Los Angeles to attend Loyola Marymount University before starting her career in film and television. After graduating, Joanna starred in the cult horror film Madison County. Since then, she's worked on such series as The Good Place, Hawaii 5-0, Criminal Minds, NICS: Los Angeles, Crazy Ex-Girlfriend, Great News, Call of Duty: Infinite Warfare and many more. Joanna also starred in the acclaimed series Video Game High School and Emma Approved, both of which were named the top 1 and 2 web-series of 2013 by VARIETY Magazine. Emma Approved then went on to win a Creative Arts Emmy in 2015. Be sure to catch Joanna in Wong Fu Production's feature film Everything Before Us available on Vimeo now.