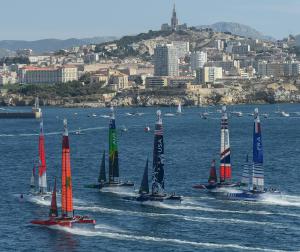 Denmark will join this picture next year for SailGP 2020, with support from main sponsor ROCKWOOL

ROCKWOOL’s involvement as the main sponsor will see Denmark SailGP Team compete in the world’s most exciting sail racing championship from 2020.

HEDEHUSENE, DENMARK, December 11, 2019 /EINPresswire.com/ — ROCKWOOL Group is proud to announce its sponsorship of the Denmark SailGP Team. The all-new Danish team will join six other national teams competing in the world’s fastest sail racing for the sport’s largest monetary prize of US$1 million.

With ROCKWOOL’s support, the Danish team will compete in the global league that will kick off in Sydney Harbour in February 2020, and take them around the world including destinations in the United States, the UK, and on to other venues that will be confirmed.

ROCKWOOL Group CEO Jens Birgersson said: “Sustainability is at the very heart of our business, with our products used to insulate buildings, save energy, and ultimately contribute toward global climate goals. Sailing is a sustainable sport and perfect fit for the ROCKWOOL brand. As a Danish company operating internationally since our earliest years, we’re proud to bring a Danish team to the world stage for the first time, and are very excited to see them race in Sydney next February and then onto other cities across the globe.”

SailGP CEO Sir Russell Coutts said: “The addition of the Danish team adds a lot of excitement heading into SailGP Season 2, which is shaping up to be another super competitive sporting championship. Denmark has achieved remarkable success in Olympic sailing and will now compete at the top level against the best sailors from six other nations in incredibly high tech, foiling, wingsailed catamarans. In addition, it’s fantastic to welcome ROCKWOOL as the main partner of the Denmark SailGP Team. This is probably one of the most exciting developments in Danish sailing for many years as it provides a new pathway for top young sailors who aspire to race professionally for their country.”

Nicolai Sehested, a multi-time Ocean Race sailor, will take the helm with a crew comprising world-class athletes, while Olympic silver medallist Jonas Høgh-Christensen has been confirmed as team manager. Sehested comments, “The moment I saw SailGP, I knew we had to be part of this thrilling new chapter in our sport’s history. It’s the best sailors in the fastest boats, all racing close to shore – it’s incredibly intense racing and a true spectacle to watch. We’re extremely grateful to have such significant support from ROCKWOOL to be able to launch this team, and we look forward to making Denmark proud.”

SailGP is sailing redefined. Established in 2018 and headquartered in London and New York, SailGP is an annual, global sports championship featuring bold, cutting-edge technology and awe-inspiring athleticism. The fan-centric, inshore racing takes place in some of the most iconic harbors around the globe and culminates with a $1 million winner-takes-all match race. Rival national teams battle it out in identical supercharged F50 catamarans, engineered for intense racing at electrifying speeds exceeding 50 knots (nearly 60 mph/100 kph). Visit SailGP.com for more information.