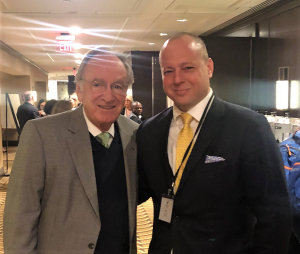 PALM BEACH, FL, UNITED STATES, January 15, 2020 /EINPresswire.com/ — James Lukezic has served as a financial analyst and institutional consultant for many financial corporations over the years. James Lukezic has worked for financial giants such as Wells Fargo, Citigroup Global Markets, and Bank of America. When he’s not growing his business portfolio, James Lukezic also devotes his time to helping worthy causes. “I’m the Chairman of ITF USA – a non-profit that helps landmine victims in over thirty countries,” he says.

Established in 1998 in the Republic of Slovenia, the purpose of ITF Enhancing Human Security was to assist Bosnia and Herzegovina in implementing a peace agreement. The purpose of this organization is to help these countries rebuild their security and rehabilitate other aspects. Since its establishment, ITF has expanded its aid to help countries and territories globally that are affected by conflict.

The United States Chapter of ITF is a 501(c) (3) charity that allows Americans to contribute to the many humanitarian programs available. All donors can receive a tax exemption whenever they donate ITF. Although the ITF started in Slovenia, it has had a long-standing relationship with the United States. Back in 1998, former U.S. Secretary of State Madeline Albright signed a letter of intent solidifying a partnership.

By the end of 2017, ITF freed of mines 6,157,717 square meters of land. Thanks to their demining efforts in BIH, ITF has freed over 85,503,068 square meters of land since 1998. Aside from their demining efforts, they also use their resources for capacity building, victim assistance, mine risk education, and destruction of surplus weapons. The U.S. has donated over $216 million to support the many causes of ITF.

James Lukezic mentioned this organization aids over thirty countries with the removal of landmines, unexploded ordnances, reconstruction, and post-conflict rehabilitation. Some of the territories ITF helps include Central Asia, Southeast Europe, Africa, the Middle East, and Central and Southern Europe. According to James Lukezic, Bosnia and Herzegovina (BIH) are one of the territories with the most unexploded ordnances and mines in the world. BIH is the most mine-infested territory in Europe.

James Lukezic is invested in his work as chairman of ITF. He also has other plans in the works to help the local community. “I’m in the process of establishing a non-profit that will assist widows in the five boroughs of NYC, issuing grants to assist with everyday life,” he says.

When he’s not doing non-profit work or advising financial institutions, James Lukezic also serves as Treasurer of the F&A Mason lodges in the Grand Lodge of the State of New York. He is also a sommelier and belongs to the United States Polo Association, New York City's Fencers Club, and the American Helicopter Society.