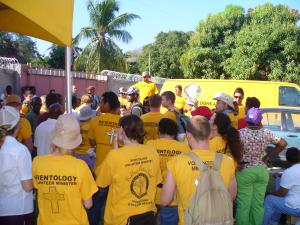 Volunteer ministers muster before deploying for the day. 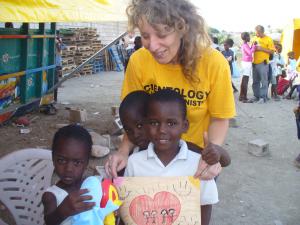 Helping some of the many who were orphaned following the earthquake. 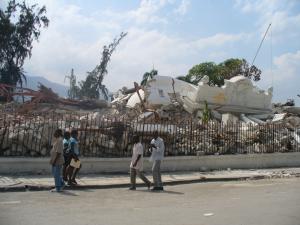 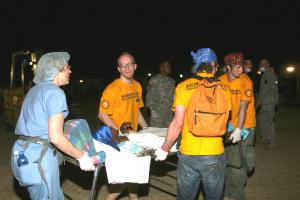 The world humanitarian community came together in force and continues to help.

Haiti is still a nation in need but rich in beauty, spirit, culture and determination.
The people of Haiti deserve a new day – a full recovery from the devastation of 10 years ago”
— Rev. Susan Taylor, Churches of Scientology Disaster Response

As I sat in the Shrine of the Sacred Heart Catholic Church in Washington, DC, with over 1000 others during a service of remembrance this last Sunday, January 12, I thought back to 2010.

Many do not remember that fateful day of January 12 at 4:53pm in the afternoon when the world changed for over a million people in the greater Port-au-Prince area of Haiti. Over 300,000 lost their lives. Thousands of homes and businesses were destroyed. With a magnitude of 7.0 and over 300,000 lost it is listed in the top 10 worst earthquakes of all time. Only the Shensi, China, earthquake in the year 1556, which was an estimated 8.0 magnitude, is listed as more severe.

Tens of disaster organizations including the US government immediately jumped to help. For the first many days only military planes were allowed to land at the damaged Port-Au-Prince airport. Wanting to get more medical help to those in need members from my church, the Church of Scientology, worked hard in partnership with Vision Airlines to get one of the first non-military planes to land at the airport. We flew in some of the first doctors and nurses and disaster volunteers from New York City and then we sent in more planes, more doctors, more nurses and more volunteers. Tents were set up near the airport and later our volunteers moved to a large duplex house kindly donated by friends. Over a 100 Scientology Volunteer Ministers, https://www.volunteerministers.org/ who are trained volunteers with numerous skills to help others in need, were there at any given time for months. As Volunteer Ministers, we all worked side by side all over the devastated area with other disaster organizations from dozens of countries. The Haitian American Nurses Association from Rockland County, New York, sent many nurses on planes provided by the Church of Scientology and later awarded the church for our work.

There were thousands of success stories to help balance out the sad ones. I had the honor of meeting one young man who overcame impossible odds. Ralph, a college engineering student, was at school on that fateful day at 4:53pm in the afternoon and was buried alive in the ruble totally crushing his left leg beyond repair. Several days later he was found by his determined father and dug out. His story continues from there as a dedicated Volunteer Minister of the Church of Scientology took Ralph under his wing, saved him from hopelessness as he lay in the Port-Au-Prince General Hospital; had him transferred to the University of Miami field hospital tent near the Port-Au-Prince airport tarmac; had him airlifted to New Haven, Connecticut, where he received a follow-up operation on his earlier amputated leg; and nurtured him along until he could dance with the girls at a Haitian American Nurses Association Gala. He was determined, though he still had hurdles to over come.

Ralph’s story continued as the Volunteer Minister encouraged him to fulfill his dream to finish college so that he could help others. Four years later, after many hurdles, his dream came true and Ralph graduated.

I first met Ralph and his parents at the Miami University field hospital in 2010 near the airport tarmac several days before he was airlifted. And three years later I met him again – no longer on crutches – with a huge smile as he proudly danced around the dance floor at a gala. He was a shining example of what Haitians are truly like if given the help and good environment to make things go right.

The stories of the heroes who spent days, weeks and months helping the people of Haiti are heart breaking and full of joy – all at the same time. They are too numerous to mention, but those who were helped remember and those here in the Washington, DC, diaspora remember.

Honoring those whose lives were lost this past Sunday, were over a 1000 gathered at the Shrine of the Sacred Heart Catholic Church for a two-hour ceremony of music and prayer. This spiritual remembrance ceremony was followed by the “I Remember – 10-Year Earthquake Anniversary Commemoration & Remembrance” reception at the Haitian embassy in Washington, DC, as the guest of the ambassador. Hundreds from the diaspora and others greeted each other and spoke of the future.

During times of disaster the human spirit rises above all differences to help his fellow man survive. This is the way it should be all the time. And this is what continues to happen around the world. The Church of Scientology has worked for over 20 years with other members of the National Voluntary Organizations Active in Disaster (NVOAD) in the spirit that, no matter what “Something can be done about it.” Volunteer Ministers have responded to hundreds of disasters here in the US and abroad including hurricane Sandy, fires in California, floods in Texas and North Carolina, tornadoes in Alabama and Oklahoma, hurricanes in Florida, Puerto Rico and the Bahamas and many others around the world.

Many other relief organizations also continue their work in Haiti helping in their own way including the American Red Cross, World Relief, The Salvation Army, Headwaters Relief, United Relief and others. The road to full recovery is long but the hope is there that working with government agencies, those NGOs that are dedicated will make a difference.

“Haiti is still a nation in need but rich in beauty, spirit, culture and determination. Sometimes when you try to pull yourself up by your own bootstraps you need help – sometimes a lot of help. The people of Haiti deserve a new day – a full recovery from the devastation of 10 years ago,” said Rev. Susan Taylor, National Director of the Churches of Scientology Disaster Response.