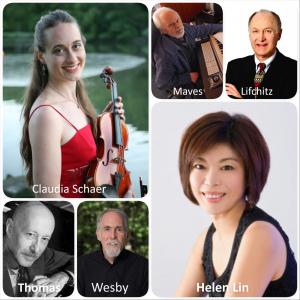 The event is part of the Composers Now Festival. It will start at 3 PM and end approximately at 4:30 PM. It will be held at the acoustically superior auditorium of Christ and St. Stephen’s Church (120 West 69th Street) in Manhattan. The auditorium is ADA accessible. No tickets or reservations needed.

The following compositions will be featured:

Roger Wesby's dis-FUNK-shun is a single-movement work written in 2015. It features unyielding dance-like rhythms and exciting harmonic colorations that gradually evolve from a mysterious opening to a cheerful ending. Wesby began his career as a jazz trumpeter and arranger before becoming an accomplished choral conductor. He attended the Eastman School and served in the Peace Corps in Central America. He recently retired from the position of Director of Choral Activities and Vocal Studies at Wagner College of Staten Island.

Andrew Thomas's “Premonitions " is a joyful work for violin and orchestra in four interconnected sections each evoking Latin American dances such as tango, bossa nova, mambo and rhumba. While the solo violin performs spectacular soaring lines the ensemble acts like a percussion ensemble imitating Afro-Cuban drumming patterns. Thomas studied at Cornell University and The Juilliard School and has lectured and conducted in Europe, China and Korea. He has served on the composition faculty of the The Juilliard School's Preparatory Division since 1970.

David Maves' No, Nonet is a light-hearted composition for piano and nine instruments built around a refrain and three contrasting episodes. The single movement work opens with ideas inspired by Southern speech that are eventually expanded to challenge the technical abilities of both the soloist and the ensemble. A graduate of the University of Michigan, Maves served as Ford Composer-in-Residence in Raleigh, NC before joining the faculty of the College of Charleston. He has received yearly ASCAP Awards since 1979; fellowships from the South Carolina Arts Commission and Meet the Composer, Inc.; and was twice honored with the Sigma Alpha Iota Inter-American Award.

Max Lifchitz’s Yellow Ribbons No. 40 belongs to an ongoing series of compositions written as homage to the former American hostages in Iran. These compositions represent a personal way of celebrating the artistic and political freedom so often taken for granted in the West. The four-movement work conjures the tragic events that befell New York City on September 11, 2001. Lifchitz is active as composer and performer and has appeared on concert stages throughout Europe, Latin America and the US.

Violinist Claudia Schaer is a graduate of The Juilliard School and Stony Brook University. Described by the press as a “rock-solid performer” and praised for her “outstanding musicianship” Schaer has appeared as soloist and chamber musician at numerous international festivals throughout Europe and China. Her recording of Bach’s Sonatas and Partitas was recently released to much acclaim.

Pianist Helen Lin graduated from the Manhattan School of Music where her mentors included Seymour Lipkin and Peter Serkin. The New York Times lauded her New York debut at Carnegie Recital Hall as winner of the Artists International Competition. Colin Clarke, reviewing her recording of Marilyn Ziffrin’s Piano Concertino (N/S R 1038) for Fanfare Magazine wrote: “Lin plays with crystal clarity and real rhythmic verve.” She has performed and recorded with North/South Consonance since 1994.

Since its inception in 1980, the North/South Consonance, Inc. has brought to the attention of the New York City public over 1,000 works representing a wide spectrum of aesthetic views by composers hailing from the Americas and the world. Its activities are made possible in part, with public funds from the New York State Council on the Arts and the New York City Department of Cultural Affairs. Additional support provided by the Music Performance Trust Fund, the Zethus Fund for Contemporary Music and the generosity of numerous generous individuals.

Helen Lin and the North/South Chamber Perform Maves’ No Nonet