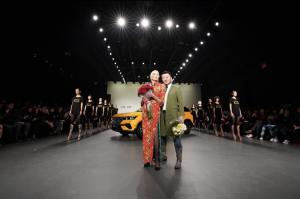 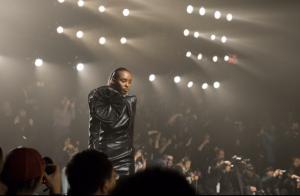 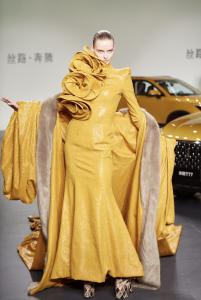 Subverting the stereotype of conventional cognition regarding clothing and fashion, designer Hu's Silk Road-Bestune collection showcased his AW20 collection in keeping with the international theme of "Silk Road · Bestune.” Sheguang Hu derived his inspiration for this line from Bestune T77, seeking to demonstrate for the show’s audience spectacular combinations of industrial and clothing designs. The comfort, security, elegant appearance, and personalized internal space of Bestune T77 Hu interpreted by means of his fashion design. Drawing upon the influence of Guochao (国潮), a popular trend among domestic Chinese young consumers, the collaboration between Sheguang Hu and Bestune T77 brings a new and completely original fashion perspective enhanced and influenced by automotive design.

“The design inspiration of this show came from the 2019 Fashion Festival hosted by Toutiao, a leading Chinese news platform,” Hu explains. "The amazing appearance of Bestune T77 caught my eye. The beautiful color and high-end modeling of the car, the details pertinent to Chinese culture and its Guochao fashion theme touched me significantly. It’s that unforgettable moment that led to this collaboration.” Hu made it clear that this runway show, with its myriad elements of science and technology, was born from that “love at first sight.”

The show treated its audience to big surprises throughout. At the outset, Sheguang Hu overturned the tradition of runway. He appeared together with the world's oldest supermodel, Carmen Dell'Orefice. Their powerful runway appearance amazed the audience the moment the pair appeared. Born in New York in 1931, American supermodel Carmen began her fashion career by appearing on the cover of Vogue Magazine in 1945, and, following that precocious accomplishment, worked with several top international photographers and graced the cover of Vogue magazine six times in total. At the Pier 59 show, Carmen, adorned in elegant Chinese red lace silk cheongsam personally fabricated by Sheguang Hu, opened the runway show with him, accompanied by specially selected music from well-known DJ Jan Willen from Holland. Hu’s collection not only conveyed the vivid design concept of the show, but also served as an opportunity for traditional Chinese culture and art to integrate with fashion and be presented on an international stage.

More than 30 international models walked the runway, with cultural diversity pre-eminently evident—cultural exchange and collision, in other words, the most essential spirit of the collection. Each dress is a precious ambient object of art, reflecting the concept of "Silk Road · Bestune.” The interpretations provided by the models who walk the world's four major fashion weeks suited the occasion ideally.

To be specific, Sheguang Hu chose the texture of patent leather as the showing’s main fabric, which he regards as the perfect embodiment of the sense of science and technology in industrial design. But at the same time, he made it fashionable.

In terms of color, the theme of Guochao was interpreted via the main color yellow of Bestune T77. Green was featured also, symbolizing the healthy life advocated by Bestune T77 and the car’s all-important attribute of environmental protection and energy-saving. Finally, the color black, reflecting the abstract art of the West, added a cultural blend.

“I never design just for clothes,” Hu acknowledged. “Instead, my core of design is always based on the people, just like the self-expression spirit of Bestune T77, which pays attention to and celebrates a free attitude toward life." Sheguang Hu added that each of his three collections of designs echoes the unique shape design of the Bestune T77.

Bestune T77 features a highly recognizable front-end design with a hexagonal rhinestone forward net and an impressive new logo design highlighting the window of the world in the middle. Sheguang Hu took the inspiration from these accoutrements and used the raindrop-like six-faceted cutting crystal as the ornament on the front surface of his designs. The ornament, illuminated by the runway lighting, radiated brilliant light and colors. The overlay of the coat and sleeve resembled the tail lamp of the Bestune T77; the wide cuff represented the vehicle’s unique LED front lamp design; the black bottom skirt, with gorgeous block-woven colorful flowers, suggested abstract Western art works, and the models appeared to have stepped directly from the painting. Their grace brought to the audience a cross-border art-exchange experience. A close look at the models’ belt-like chest-ornaments that splashed diagonally across the body brought to mind the safety-belt that guards the careful driver, and the blooming flowers served to represent guidance along the way ahead. The silk Organza, together with the black patent leather, echoed the design of Bestune T77’s airbag, another staple of security, and the sense of happiness within a high-end lifestyle.

Yang Dayong, deputy general manager of FAW Car Co. Ltd., described Guochao as the combination of technological progress, art, and Chinese culture. The reason Guochao is so strongly favored by young people is not only because it’s trendy, but also because it provides its wearers with a profound self-identity. As an innovative car-maker, the new Bestune functions similarly, exemplifying the young and creative aesthetic by means of innovative technology and design. Young people fall in love with Bestune, which proudly adheres to the core value of new Bestune: "smart manufacturing, happy Bestune.” Although the technology will continue to advance, the art will remain young forever.