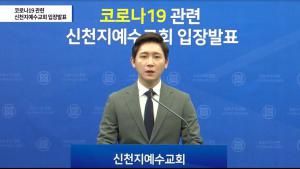 In recent days, Shincheonji Church of Jesus has been the target of scapegoating for the COVID-19 virus outbreak. This is an official statement.

NEW YORK, NEW YORK, USA, March 2, 2020 /EINPresswire.com/ — We would like to express a word of comfort to fellow citizens who are striving to overcome these difficult times. To contain the spread of the new coronavirus disease (COVID-19), Shincheonji Church of Jesus provided accurate information about all congregants, affiliated locations, and trainees in Korea and abroad, and we are cooperating with all measures of the South Korean authorities by utilizing all of our capabilities, putting utmost efforts for prevention and cure.

The Korea Centers for Disease Control and Prevention (KCDC) sent this list to local governments on the condition of confidentiality. On Feb 26, 17 cities and provinces started conducting telephone surveys with the congregants of Shincheonji Church of Jesus, and those with symptoms have been tested for infection first.

In regards to COVID-19, the allegation that Shincheonji Church of Jesus is intentionally hiding the number of its congregants is absolutely untrue. Shincheonji is aware of the present health crisis and considers the health and safety of citizens and congregants as the highest priority, and has submitted information to the proper authorities.

An individual of an organization sued Shincheonji claiming we violated the Infection Disease Control and Prevention Act by refusing to submit data or providing false data. This is not true as we are cooperating and providing information requested by the health authorities.

Is not belonging to mainstream churches in Korea a reason to die? We call for the truth regarding this case. Please do not dismiss it as a mere issue related to religion or family, but please look into the fundamental nature of the issue. Shincheonji Church of Jesus did not create COVID-19. We are citizens who have followed the instructions of the authorities, and we are victims of the virus and religious persecution.

We want to make it clear once again that we did not intentionally delay providing the list of congregants or hide anything. Providing such a list was not an easy decision for Shincheonji Church of Jesus. Among our congregants, there are many who suffer from domestic violence, persecution, and even life-threatening situations because of their faith. This is backed by the number of congregants who are taken to so-called “Cult Counseling Offices” and have faced confinement, violence, and illegal actions. The number amounts to over 100 congregants per year. In the midst of such persecution, two female congregants lost their lives. One was killed by her husband and the other by her father, and there was the third victim on Feb 26.

We are deeply sorry for infections caused by some congregants who were hesitant to reveal their affiliation with Shincheonji at first. However, as politicians and media outlets were criticizing Shincheonji severely day after day–even calling it the epicenter of the virus–these people were afraid to say that they are Shincheonji members. We ask for your understanding once again.

Since the situation occurred, some 4,000 cases of injustice against Shincheonji congregants have been reported. These negative actions include notices of termination of employment, workplace bullying, domestic persecution, labeling, and slandering.

We demand media outlets that are reporting fake, speculative, or one-sided news based on the claims of slanderers to stop immediately. Please stop framing Shincheonji as the main culprit of the COVID-19 outbreak. We take all measures possible to protect our congregants. We will fight to the end against fake news and the “cult” framing that mainstream churches have been promoting.

The Shincheonji headquarters and church workers across Korea are cooperating with local governments and making phone calls to congregants. We promise to exert all efforts and will continue to cooperate with the health authorities and local governments to bring the COVID-19 epidemic to an end.

BROOKLYN, NY, USA, March 1, 2020 /EINPresswire.com/ — Endocrine Technology, LLC is New York based Biotechnology detailed at www.etdengue.com.
Mission Objective: We want to be Bond..deploying ETBOND Technology (Registered trade name) to save Lives Globally. We work only with like minded collaborators who are leaders and active partners in social, political and in life science industries wishing to advance expediently without conventional bureaucracies.
We have Patented Technology to Modulate Earliest, Most Ancient human defense system that is medically known as Alternate Complement System or Fluid protease system.
This technology is most relevant to present and evolving scenario of pandemic of Covid-19 to target Covid-19 induced interactions on host cells and its immune system.

Most particular applications of our technology advances are

b. Intravenous formulation: Formulation work and safety studies are required

Our Objectives: We want collaborative partners who allow us to be leader in directing our technology advances in designing clinical trial, lab work and monitoring responses.
Technology Highlights: In keeping with "Recent Advances in Genomics and Fundamentals of Immunology."
Data: a. Third party literature emphasizing the importance of Factor H in immune piracy of enveloped viruses and the need to target them.
b. Proof of concept data modulation of Alternate Complement System (Factor H and its adverse effects exa. Factor D)
Human Safety: Extensive third party data (Off label applications of Established drug and its formulations.
We encourage your responses and questions to email: etbond@gmail.com