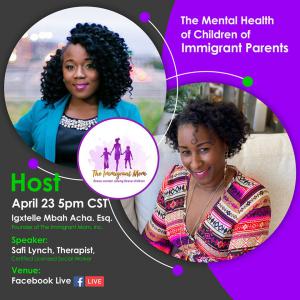 Safi Lynch, who is originally from Liberia, West Africa, immigrated to the United States with her parents when she was twelve. The licensed, clinical social worker (LCSW) contributed to the conversation about the mental health of children of immigrant parents.

Immigrant moms often face extreme difficulty and vulnerability when raising children in a culture that recognizes mental health. That's because America's guidelines, laws, and regulations sharply contrast with their own practices and values. These factors lead to additional stress when assimilation conflicts with their new culture.

Igxtelle Mbah Acha, Esq, who immigrated to America from Cameroon, Africa, welcomed Lynch and invited her to share invaluable insights. The therapist explained that she provides mental health services to immigrant cultures that have culture identity challenges. Among the most prevalent concerns are parents who don't give enough praise to their children.

Lynch stated that the absence or lack of verbal praise when speaking to children of many immigrants is a cultural norm. She added that cultural indifference is responsible for a uneasiness to adapt. "Part of the challenge from the parents' perspective is learning to praise our children," she says.

Safi Lynch added that "children of immigrant parents want to pursue their own dreams, passions, and happiness, but they feel obligated to (follow) the path their parents' desire because of guilt. They know (and are often reminded) how much their parents sacrificed when they came to America. The solution is to praise the children where they are."

The Immigrant Mom radio show is broadcasted live every other Thursday at 5 p.m. CST. Safi Lynch's guest appearance is available for watching and listening at https://www.facebook.com/TheImmigrantMom

Safi Lynch is a therapist whose specializes in working with children of immigrant parents. She has been practicing for 19 years and is licensed in the state of Maryland. For more information, visit https://www.facebook.com/safilynchtherapy

The immigrant Mom is the first organization of its kind. It, along with The Immigrant Mom radio show was formed by founder, Igxtelle Mbah Acha, Esq., The immigrant Mom addresses the immediate and advance needs of international mothers raising children in a country that they did not grow up in. For additional information, go to https://theimmigrantmom.com, or call (682) 234 6674. Corporate and private sponsorships are available. For more information, email FranBriggs@aol.com