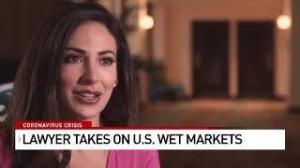 Carissa Kranz, Super Lawyer & Founder of the BeVeg Certified Vegan Symbol sounds alarm for the tens of thousands of wet markets across the U.S. just like the one in Wuhan, China where COVID-19 has traced origins. 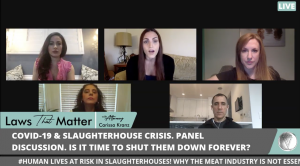 Legal expert Carissa Kranz sounds the alarm about the existence of wet markets located across the U.S. — just like the one that caused COVID19 in Wuhan, China.

Unregulated slaughterhouses are hotbeds for deadly human contagion. While NY is the epicenter for COVID-19, it can also be the launching pad for the next viral attack.”
— Carissa Kranz, Esq., Super Lawyer & Founder of BeVeg Vegan Certification

PALM BEACH GARDENS, FLORIDA, UNITED STATES, May 2, 2020 /EINPresswire.com/ — As we race for a vaccine and practice unprecedented social distancing, the question as to how to prevent future pandemics remains. COVID-19 was born in a wet market in China. A wet market is another word for an unregulated street slaughterhouse that is wet with blood, urine, guts, feces, and other bodily fluid spillovers as animals sit alive in cages to be purchased and slaughtered on scene in close proximity to other species of animals and humans.

Expert consensus is wet markets are a grave danger to global public health and a ticking time bomb for the next plague. “Whenever wild, farmed, domestic, and companion animals are crammed together in close quarters for slaughter, there is a high risk of pathogens jumping from one species to the next,” says legal expert Carissa Kranz. “The world is up in arms over China’s wet markets, but what about the tens of thousands of wet markets in operation today in the United States?” On behalf of New York residents, attorney Kranz filed a legal petition for rulemaking in accordance with a proposed NY senate bill addressing the State Administrative Procedure Act to call upon lawmakers to immediately shut down the 80-90 live animal wet markets in operation today in New York.

"Unregulated slaughterhouses are hotbeds for deadly human contagion. While NY is the epicenter for COVID-19, it can also be the launching pad for the next viral attack.” As we experience an unprecedented global health and financial crisis legislators on both sides of the isle are calling upon the "WHO" to ban these wet markets across the world, which they say are proven breeding grounds for virulent zoonotic outbreaks that morph into deadly human pandemics. Besides COVID, other deadly human pandemics traced back to wet markets include SARS and MERs. In fact, the CDC says 3 out of 4 human viruses are of animal origin.

In an urgent plea to the WHO to immediately ban all wet markets globally, Lindsey Graham and Cory Booker together write: “As this pandemic continues to threaten the lives of millions, pushes healthcare systems to the breaking point, and devastates economies around the world, it is imperative that we all take action as a global community to protect public health.”

But what about the tens of thousands of wet markets happening right here, right now, on US soil? Attorney Kranz says that while a global ban will be popular and commendable, it will be nearly impossible to enforce. However, “a ban of all live animal wet markets on US soil can be legally enforced, and we should do what is within our power. If a bipartisan Congress is united on the public health risk of these markets and cause of the virus, why are these wet markets still open and in operation in America?” Attorney Kranz urges lawmakers to take immediate action to exercise pandemic prevention hygiene before it is too late and more human lives are destroyed. “This is a chance for the United States to lead the WHO by example as lawmakers further their agenda for a ceremonial global ban of these markets.”

History has proven that global public health and safety are at risk when humans exploit animals for meat. Just consider the following deadly viral global pandemics of animal origin that have collectively killed hundreds of millions of people, if not more.

–COVID-19, SARS, and MERS are all traced to live animal wet markets.
–Ebola is connected to the consumption of the meat of wild animals.
–E-coli and salmonella are connected to finding feces in food. A Consumer Report found that 100% of the hundreds of pounds of beef examined contained fecal matter.
–Swine flu strains repeatedly develop during the raising and slaughter of pigs for meat.
–Mad cow disease is a fatal disease which destroys our brain and spinal cord.
–Avian flu repeatedly develops from the raising and killing birds for meat.
–Spanish flu, which killed 50-100 million people, and affected 500 million, or one-third of the world’s population, was an avian flu from an animal farm in Kansas.
–HIV virus was introduced as a deadly human to human virus after humans came into contact with contaminated Chimpanzee blood as humans hunted them for meat.
–Hepatitis E is contracted by eating undercooked meat.
–The measles (MeV), infects 30 million people annually, and kills close to 200,000 globally, is traced to early civilization in the middle east when cattle was farmed in close proximity to humans.
–Bubonic plague, or Black Death, is from eating animals infected by a deadly bacteria carried by fleas, or come into close contact with their bodily fluids.
–Smallpox has increasing evidence from DNA and RNA sequencing that it originated as cowpox and mutated to evolve to what we call smallpox. It is estimated that the smallpox killed 300 million people in the twentieth century.
–Malaria is said to have originated in humans from chicken farming before mosquitos became carriers to keep the virus alive.
–Nipah Virus (NiV) is transmitted through contaminated food. Its origin is traced to pigs, and jumped to humans through sick pigs or close contact with their contaminated tissues.
–Listeria infection is a food borne bacterial illness most commonly caused by eating improperly processed deli meats and unpasteurized dairy products. Notably, processed meat is a group 1 carcinogen, according to the World Health Organization.
–Domestication of the horse led to the common cold virus that still plagues humankind.
–Domestication of chickens gave humans chickenpox, shingles, and various strains of the bird flu.
–Introduction of livestock cattle is responsible for the emergence of measles, smallpox, and tuberculosis.

The petition for rulemaking was filed based on a proposed NY Senate bill, which requires an agency response with 100 NY resident signatures. The petition collected about forty thousand signatures. To date, there is no response by lawmakers. The petition was filed on behalf of the public by the Law Offices of Carissa Kranz, a Palm Beach Gardens personal injury law firm. “Injured clients include people and animals. Live animal wet markets cause injury to both. Not only is it cruel and inhumane, it’s a public health crisis that will likely lead to the next pandemic,” says attorney Kranz. The Petition for rulemaking was a CBS exclusive interview and then further discussed on a newly launched digital media show — Laws THAT Matter — hosted by attorney Kranz.

The Laws THAT Matter show airs live every Wednesday at 12p EST / 9a PST on Jane Unchained News Network. The show logo is stamped in the lower third with the BeVeg certified vegan symbol. BeVeg is the only law-firm-issued vegan symbol with global trademark protection. The Law Offices of Carissa Kranz manages BeVeg as a practice area for vegan certification within the firm

legal commentator, Carissa Kranz, appeared on a Florida CBS news station to sound the alarm about the existence of tens of thousands of wet markets in the U.S.