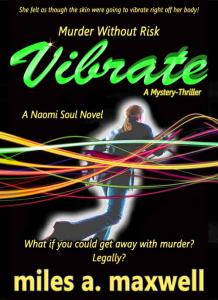 Miles A. Maxwell releases his new thriller Vibrate, ripped from today's headlines, the prediction of an uncertain future.

Is this a new type of virus or are these attacks a weapon?”
— Miles A. Maxwell

SHOW LOW, AZ, U.S., May 4, 2020 /EINPresswire.com/ — Miles A. Maxwell’s Vibrate, a thriller that might be ripped from the today’s headlines, brings to light hidden evidence behind another budding epidemic: “Billionaires are dying like flies in New York City. Is it some type of virus, or are these attacks a weapon?” asks a novel that connects a series of murders to expanding disease and technology never proven safe.

When New York City billionaires begin dying mysteriously, their loved ones turn to former FBI Agent Naomi Soul. Are these victims dying of natural causes as the police determine? Older victims survive, yet younger ones perish. Are these deaths the result of some never-before-seen disease? Some of the victims were in excellent health. Are the victims actually being assassinated by a new weapon disguised as something ordinary? The symptoms are so strange, the killers may get off scot-free.

Finally, an astonishing truth is revealed. In hot pursuit, Naomi fights to take the killers down before the they can supplant humans as the dominant life form on the planet. This highly-acclaimed novel explores the beginning of that end, and what we might or might not do personally to change the future.