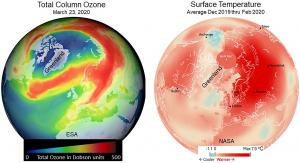 The ozone hole over Greenland and most of the Arctic on March 23, 2020, compared to simultaneous winter warming especially in Europe and northern Asia. 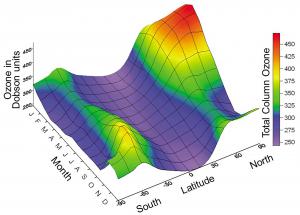 Ozone normally accumulates in the Arctic from January to April. It is during this peak in ozone that ozone depletion is greatest within the Arctic but is still substantial at mid latitudes. 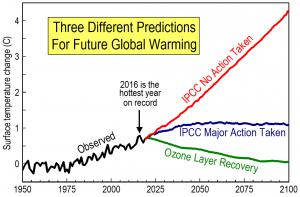 If ozone depletion is the cause of global warming, temperatures should generally decrease as the ozone layer recovers.

Ozone depletion plays a much bigger role in global warming than commonly recognized, according to Dr. Peter Ward a 27-year veteran of the U.S. Geological Survey

Between 1965 and 1998, we humans unwittingly carried out the most definitive experiment ever done relating global warming to concentrations of gases in the atmosphere.”
— Dr. Peter L. Ward, Chief Scientist at Science Is Never Settled Inc.

JACKSON, WYOMING, UNITED STATES, May 4, 2020 /EINPresswire.com/ — Weather balloons launched in the Arctic this winter measured up to 90% drop in concentrations of ozone in the ozone layer, 9 to 22 miles (15 to 35 km) above Earth. By late March, the largest ozone hole ever observed in the Arctic had formed, covering an area more than three times the size of Greenland.

Temperatures were average throughout November but then continued at November levels. The balmiest weather of all was in Moscow where daily average lows in January were 28ºF (-2ºC), far warmer that the customary 9ºF (-13ºC). In Tokyo, temperatures averaged 41ºF (5ºC) rather than the usual 32ºF (0ºC). Even in Boston, daily lows in January averaged 32ºF (0ºC) instead of normally hovering around 21ºF (-6ºC). Cherry blossoms bloomed in January in New York City, months ahead of schedule. Temperatures were no longer cold enough in Germany to harvest ice wine.

“This winter, we set all-time temperature and ozone depletion records by a wide margin,” according to Dr. Peter L. Ward, Chief Scientist at Science Is Never Settled, Inc. Ward has been studying the relationship between ozone levels and global temperatures for more than a decade. He wonders whether these extraordinary atmospheric phenomena could be related.

The relationship between ozone depletion and increasing temperature is complicated by the observation that ozone accumulates in polar regions during winter—January to April in the Arctic as shown in the second figure. It is during this yearly peak in ozone that depletion is observed to occur. While the greatest depletion is within the Arctic, substantial depletion also occurs at mid-latitudes. It is this seasonal peak in ozone that confuses the apparent correlation of increasing temperature with increasing ozone in the first figure.

“Between 1965 and 1998,” Ward explains, “we humans unwittingly carried out the most definitive experiment ever done relating global warming to concentrations of gases in the atmosphere. Still to this day, no one has ever shown by experiment, a cornerstone of the scientific method, that increases in greenhouse-gas concentrations can actually cause global warming.”

Beginning around 1965, we began manufacturing large volumes of chlorofluorocarbon gases (CFCs) for use as refrigerants, spray-can propellants, solvents, and foam-blowing agents. By 1970, depletion of the ozone layer and average global temperatures began increasing.

In 1974, scientists discovered that when CFCs reach the stratosphere, they can be broken down by solar ultraviolet radiation to release atoms of chlorine. One atom of chlorine, especially during winter months, can destroy more than 100,000 molecules of ozone.

In 1985, with discovery of the Antarctic ozone hole, scientists realized ozone depletion was a much bigger problem than they had thought. So they worked very effectively with political leaders at the United Nations to pass the Montreal Protocol in 1987 mandating major cutbacks in production of CFCs beginning in 1989. Sure enough, by 1993, increases in CFCs stopped. By 1995, increases in ozone depletion stopped. By 1998, increases in average global temperatures stopped. Between 1970 and 1998, the world warmed on average 1.1ºF (0.6ºC), approximately two-thirds of all warming observed since 1950. Humans had accidentally caused global warming and then took the action necessary to stop this increase in warming.

Volcanoes also deplete ozone when they emit large amounts of chlorine into the atmosphere. The largest explosive eruption since 1912 was from Mt. Pinatubo in the Philippines in June 1991. During the following winter, total column ozone in Switzerland was depleted more than 15 Dobson units, warming parts of Europe and northern Asia as much as 5.4ºF (3ºC). But then aerosols formed in the lower stratosphere from erupted water and sulfur dioxide. These aerosols reflected and scattered sunlight, cooling Earth as much as 0.9ºF (0.5ºC) for a few years.

In 2014, Bárðarbunga volcano in central Iceland extruded basaltic lava flows over an area of 33 square miles (85 square kilometers), the size of Manhattan, the largest basaltic lava flow since 1783. Global temperatures increased very rapidly 0.5ºF (0.3ºC) by 2016, which is still the hottest year on record.

Throughout Earth history, whenever we find evidence of large basaltic lava flows covering tens, to thousands, to millions of square miles, we find evidence of major global warming and widespread mass extinctions—the larger the basalt flow, the longer it took them to form, and the greater the observed warming. Basaltic lava flows emit ten times more chlorine than explosive volcanoes such as Pinatubo. Their very hot temperatures of around 2200ºF (1200ºC) provide a way to convect chlorine rapidly into the stratosphere.

We still have much to learn about the precise chemical paths causing ozone depletion, how they vary by season, and why these effects are usually greatest during the second winter after an eruption. Ward, in his paper “Ozone depletion explains global warming,” concludes that a decrease in ozone concentrations at mid latitudes by 30 Dobson units typically leads to global warming of approximately 1.6ºF (0.9ºC). He provides much more detail in his book “What Really Causes Global Warming?” and his extensive website WhyClimateChanges.com.