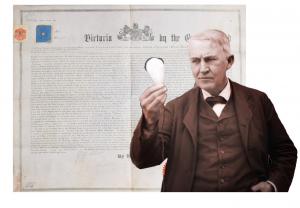 Important collection of 37 original British patent letters pertaining to Thomas Edison’s invention of the light bulb and the birth of incandescent lighting, dating from 1878 to 1884 (MB: $10,000). 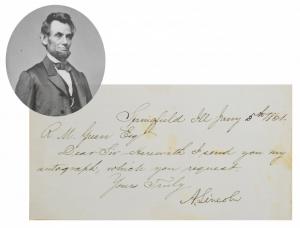 Letter written and signed by Lincoln on Jan. 5, 1861 – after his victory as president and before his inauguration – in response to an autograph request from an “R. M. Green” (MB: $500). 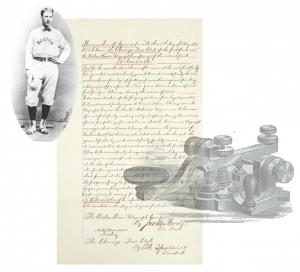 Milestone agreement from the early days of professional baseball, signed by Albert Spalding, to telegraph the scores of the Chicago Ball Club, in-game, to fans across the country (MB: $500). 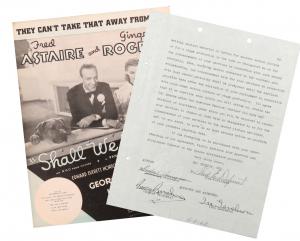 George and Ira Gershwin’s signed contract to write the musical scores (songs and lyrics) for the 1937 movie Shall We Dance, starring their friends Fred Astaire and Ginger Rogers (MB: $100). 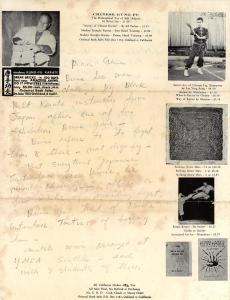 The important collection of 37 original British patent letters pertain to Edison’s invention of the light bulb and incandescent lighting, from 1878 to 1884.

The patents comprise the European holdings of Edison’s archive, to include his patent in 1879 for the light bulb, the most valuable patent ever granted, and the 1880 patent for the incandescent lamp”
— David Gindy

CORAL GABLES, FLA., UNITED STATES, May 6, 2020 /EINPresswire.com/ — An important collection of 37 original British patent letters pertaining to Thomas Edison’s invention of the light bulb and the birth of incandescent lighting, dating from 1878 to 1884, is the expected headliner in an Internet-only auction ending May 14th at 8 pm Eastern time by One of a Kind Collectibles. Bidding is open now, at www.OAKauctions.com.

The historical significance of Edison’s inventions, and the 37-patent archive that documents their development in Europe, cannot be overstated. The man who said that genius was “one percent inspiration and 99 percent perspiration” saw his sweat pay off handsomely, as all of humankind was pulled out of the nighttime darkness and into increased productivity, albeit a little less sleep.

“This is one of the most historic science archives to ever come to market, representing the very dawn of electric light,” said David Gindy of One of a Kind Collectibles. “These patents comprise the European holdings of Edison’s archive, to include his patent in 1879 for the light bulb, only the most valuable patent ever granted, and the 1880 patent relating to the incandescent lamp.”

The archive also features patents for Joseph Swann, the English inventor also working on the light bulb at the same time; and George Westinghouse’s Chesbrough patent of 1878, which he used to get the contract to illuminate the Columbian Exposition, as chronicled in the film Current Wars. All 37 patents are being offered as a single lot. The minimum bid has been set at $10,000.

The rest of the auction – around 150 lots in all – is no less impressive, and features items in a wide range of categories, to include historical, presidential, science, sports, aviation, art and literature. The names in the sale are also impressive and wide-ranging, such as Abraham Lincoln, George and Ira Gershwin, Muhammad Ali, Bruce Lee, Albert G. Spalding and Rain in the Face.

Lincoln is always a big attraction with collectors. A letter written and signed by Lincoln on Jan. 5, 1861 – after his victory as president and before his inauguration – has a minimum bid of $500. The letter, on a 6 inch by 3 inch sheet, is in response to an autograph request from an “R. M. Green”. “I herewith send you my autograph which you request,” Mr. Lincoln very kindly wrote.

A milestone agreement from the early days of professional baseball, signed by Albert Spalding, also has a minimum bid of $500. The 1883 document agrees to telegraph scores of the Chicago Ball Club (of which Spalding was a part owner), in-game, to their many fans nationwide. In a sense, the agreement documents one of the earliest examples of a nationwide sports “tele-cast.” Spalding, a member of the Baseball Hall of Fame, was a pitcher, team manager and executive.

An archive of material from James Yimm “Jimmy” Lee – martial arts legend Bruce Lee’s friend, student and certified instructor – has a minimum bid of $200. The archive contains rare Kung-Fu books written by Jimmy Lee, a signed photo of him breaking bricks and, most important, a 1964 letter in which Lee recounted Bruce Lee’s victorious fights over Wong Jack Man and G. Fu Man.

George and Ira Gershwin’s signed contract to write the musical scores (songs and lyrics) for the 1937 RKO movie Shall We Dance, starring the brothers’ friends Fred Astaire and Ginger Rogers, two pages in mint condition and signed in bold ink by both men on page 2, has a minimum bid of $100. It would be George and Ira’s final collaboration; George died from a brain tumor in 1937.

Albert Einstein is another name that’s hugely popular with collectors. A letter typed and signed by the renowned theoretical physicist, in German, carries a minimum bid of $500. The letter, to Einstein’s friend Dr. Isidore Held, is dated Feb. 5, 1939 and discusses an upcoming meeting to talk about a situation involving Dr. Rudolf Ehrmann, at one time Einstein’s personal physician.

A limited-edition copy of the iconic photograph of Muhammad Ali standing over a fallen Sonny Liston during their 1965 rematch, signed by Sports Illustrated photographer Neil Leifer (#16 of 350), has a minimum bid of $200. The photo is signed and inscribed by Leifer to Arthur Cooper, GQ Magazine’s editor-in-chief for over twenty years and a huge promoter of both Ali and Leifer.

Rain in the Face was one of the most feared and respected Native American warriors of the late 19th century. The Hunkpapa Lakota Indian is believed to have delivered the death blow to Gen. George A. Custer at the Battle of Little Bighorn in 1876. An original half-length cabinet photo of Rain in the Face in a jacket and tie, signed on the reverse in pencil, has a minimum bid of $500.

Napoleon Bonaparte needs to introduction, especially not to collectors who diligently seek out items signed by the French general. A lengthy letter written and signed by Napoleon, in French, dated March 29, 1802, in which he transmits numerous military orders across four pages on two adjoining sheets has a minimum bid of $200. The letter is on Consul de la Republique letterhead.

A vintage photograph of three of the men who helped raise an American flag atop Iwo Jima’s Mount Suribachi in World War II, has a minimum bid of $200. The photo, signed in fountain pen by all three men, shows the soldiers holding and examining a tattered second flag. The photo, in fine condition, is archivally matted and framed to an overall size of 15 ¼ inches by 13 ½ inches.

A certificate of heroism and appreciation pertaining to the worst airship disaster in U.S. history – the USS Akron, which went down in flames in April 1933, killing 76 people – has a minimum bid of $100. The document, given to Sgt. Joseph Forsythe of the New York police, is signed by many of aviation’s most famous figures, including Charles Lindbergh and Eddie Rickenbacker.

One of a Kind Collectibles Auction was founded in 1994. The firm is dedicated to autographs, art, documents, philatelic, coins, currency and fine collectibles. To receive a free catalog, call 1-800-570-7273, or fill out the form that’s on the company website: www.OAKauctions.com.

One of a Kind Collectibles Auction is always accepting quality consignments for future auctions. To consign a single piece or an entire collection, you may call toll-free, 800-570-7273, or e-mail to consign@oneofakindauctions.com. They offer quick turnaround and immediate cash options. To learn more, or to register and bid now for the May 14th auction, visit www.OAKauctions.com.