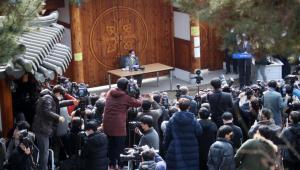 Chairman Man Hee Lee of Shincheonji addresses media at the height of the coronavirus outbreak in South Korea.

Shincheonji has become a scapegoat during this epidemic…”
— Massimo Introvigne

NEW YORK, NEW YORK, USA, May 8, 2020 /EINPresswire.com/ — During the peak of the South Korean coronavirus outbreak in Daegu, international media drew attention to Shincheonji Church. Officially, named, "Shincheonji, Church of Jesus, the Temple of the Tabernacle of Testimony," it is a new religious movement that began in South Korea.

Massimo Introvigne, an Italian sociologist and the founder and Managing Director of the Center for Studies on New Religions (CESNUR) in Torino, Italy discusses the issues the church faces in an article titled, “South Korea: Intolerance Against Shincheonji Church After Coronavirus Incident.” He states, “As a scholar who has studied Shincheonji, I am concerned with the fact that international media that obviously know nothing about it have ‘discovered’ this church overnight because of the coronavirus incidents in Korea, and have repeated inaccurate information they found on low-level internet sources.”

Introvigne defends the church and asserts, “As far as I have ascertained, Shincheonji is cooperating with the Korea Centers for Disease Control and Prevention (KCDC) to contain the coronavirus, complying with all the indication of the authorities, and even testing for the virus all of its members at its own expenses. Shincheonji has become a scapegoat during this epidemic, in order to distract the public attention that despite concerns voiced by the Korean Medical Association, South Korea did not prohibit entry into the country from China. The South Korean public news agency, Yonhap News, mentioned the possible relationship between the arrival of 1,000 Chinese students in school trips to Daegu earlier this year and the outbreak of the epidemics there. Instead, Shincheonji is unfairly blamed, even if, 24 hours after one of its devotees was identified as infected with the virus, it provided the authorities with a full list of its members. Members were also encouraged to tell co-workers and their bosses that they belong to Shincheonji—no small step, since because of the anti-Shincheonji campaigns people normally keep a low profile in the workplace, and now they put themselves at risk of being insulted, threatened, and even losing their jobs.”

He highlights the plight and victimization of Shincheonji members who have contracted the virus. He explains the harsh treatment is exacerbated by the Korean media describing the members as “cultists.” Introvigne describles the maltreatment as a range begining from insults to discrimination in the form of loss of employment and even being scapegoated for the pandemic itself.

He concludes his article by explaining that established fundamentalist groups that have more political backing are using the pandemic as a pretext to up their campaign against Shincheonji. Finally, Introvigne states that while Shincheonji certainly teaches differently, and that it is normal that people can disagree with it, fundamentalist anti-cult Korean Protestants are now engaged in a shameful form of profiteering. “Responsible international media should be wary of inadvertently cooperating with it.”