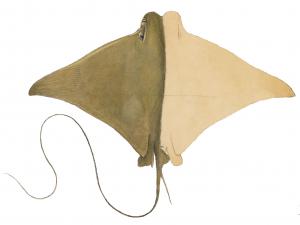 The perch-like Gulf kingfish, detected through DNA it left in waters off New Jersey’s shore, has never before been recorded north of Chesapeake Bay, Virginia, about 250 miles (400 km) to the south 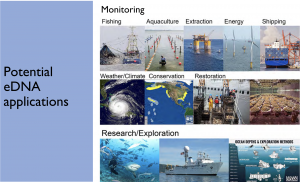 A species of ray — the Brazilian cownose ray, Rhinoptera brasiliensis (https://bit.ly/2WJZn0V), and the Gulf kingfish, Menticirrhus littoralis (https://bit.ly/3fxVJ2V), have been turning up when the weather turns warm in New Jersey’s Barnegat Inlet, about a two hour drive south of New York City.

Led by Mark Stoeckle of The Rockefeller University and published in the journal Frontiers in Marine Science, the study (available at https://bit.ly/2WD6OXE) involved drawing seawater twice monthly for two years and testing it for genetic material — DNA contained in cells sloughed off the slimy, gelatinous outer coating of a fish as it swims, for example, in its excretions, in tissue fragments shed in combat with a predator, or after death or injury.

Dr. Stoeckle explains that DNA degrades and disperses within a few days of an animal’s departure, but lingers in the water, despite currents and tides, long enough to detect a species’ passing presence.

Over two years, from spring 2017 to spring 2019, sampling was conducted at a pair of Barnegat Inlet, NJ sites within a few miles of each other — an outer shore to sample Atlantic Ocean waters, and inside a sheltered bay.

In 2010, a Census of Marine Life program, the Future of Marine Animal Populations (FMAP), forecast changes in diversity of marine species based on available habitat and anticipated changes in water temperature.

Jesse Ausubel, Director of the Program for the Human Environment at The Rockefeller University, and CoML’s co-founder, says the Brazilian cownose ray or Gulf kingfish far north of its known range fits FMAP’s prediction, while noting that other explanations remain possible. For example, the animals may have simply evaded New Jersey trawl nets for years.

Says Dr. Stoeckle: “Promising work is also underway to confirm a relationship between the concentration of a species’ DNA in seawater and the abundance of that species in the water. If water samples can provide an index of the number or total weight of fish of a given species in a defined ocean area, that offers a potential leap forward for sustainable fisheries and ocean management, improving the rationality with which fish quotas are set and the quality and reliability of their monitoring around the world.”

Tony MacDonald, Director of Monmouth University’s Urban Coast Institute, which helped initiate the work, adds: “Censusing marine fish and other animals that move typically involves costly, time-consuming surveys with specialized equipment and personnel. eDNA science is granting humanity a very old wish: an easy way to estimate the distribution and abundance of diverse fish species and other forms of aquatic life in the dark waters of rivers, lakes, and seas.”

Dr. Stoeckle, who has worked with high school and college students to study New York Harbor and the Hudson River, adds that “the collection process is simple enough for supervised schoolchildren or citizen scientists on any coast anywhere to help monitor the changing ranges of all marine life.” Co-author Mithun Das Mishu joined the project when he was a sophomore at Hunter College.

After water is drawn, it is filtered to concentrate the DNA for extraction. The target segment of the DNA is amplified in a laboratory and then sent for “next-generation” sequencing, the result of which—a record of all the DNA sequences in the sample—is fed into computer software that counts the number of copies of each sequence and searches for matches in an online public reference library.

The New Jersey study, co-authored by Mishu and bioinformatics expert Zachary Charlop-Powers, detected bony fish species in consistent seasonal patterns. And they found a small number of species accounted for the great majority of DNA obtained.

Detection of rays and other cartilaginous marine species, meanwhile, was confined mostly to warmer months.

In addition to straining its genetic material from the water, researchers used DNA to identify the decayed remains of a Brazilian cownose ray washed ashore in the sampling area in August 2017.

The researchers also added to growing global databases the first DNA reference sequences for 31 regional species catalogued by New Jersey scientists from trawl surveys over the past 30 years.

Dr. Stoeckle’s earlier studies of New York’s East and Hudson Rivers revealed the presence or absence of several key fish species passing through those waters. The weekly data snapshots created a moving picture that largely reinforced and correlated with knowledge from years of fishnet trawls.

By conducting a series of tests over time, the work pioneered a novel way to record fish migration. eDNA has a goldilocks quality just right for research, Dr. Stoeckle notes: If it disappeared too quickly, sampling wouldn’t tell us much; if it lingered too long, too much DNA would be in the water, undermining useful, timely insights.

Next steps include fine tuning calibrations, comparing eDNA “reads” and results with data from traditional surveys conducted with nets and sonar. Do 100 DNA “reads” indicate the presence of 1 fish or 10 fish?

Also to be determined: the rate at which different fish and other marine species shed DNA.

Other images and tables used in the paper (https://bit.ly/2WD6OXE) are also available on request