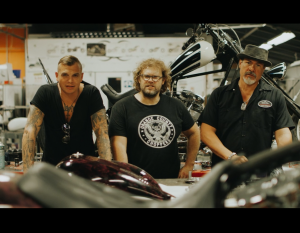 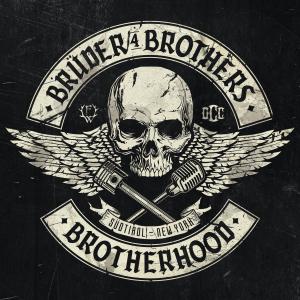 Brotherhood comes in all forms; it can be an alliance between like-minded individuals as well as like-minded musical creatives. For Frei.Wild's lead singer Philipp Burger and his band-mates, brotherhood is a way of life. Over nineteen years, the Northern Italy quartet has released 15 albums and topped the German charts on numerous occasions, as well as won numerous awards for the millions of records they have sold. But the unlikely fellowship the German-Italian group cultivated with Paul Teutul and his son Mikey and Alex Franco, a long-time associate, better known to the world as Orange County Choppers, is all about their love of motorcycles and compelling music.

The joint project between Frei.Wild, which translates to "outlaws" in German, and the motor revving all-American stars go by the name Brüder4Brothers. They have been long time friends despite their distance and are now closing the gap with their upcoming album, Brotherhood on August 7th, available through Rookies & Kings and distributed by Soulfood Music. The album includes catchy, memorable melodies and powerful guitar riffs blended with classic country components.

The music video for "Freundschaft Brotherhood" [Friends Brotherhood] looks like a commercial for American patriotism; it includes New York City, open roads, rock music, motorcycles, and lots of beer drinking. Behind their tattoos and intimidating baritone voices, all the men are kind and dedicated. Together, they busk in the subway and ride motorcycles worth a mint with their arms around each other's shoulders. No matter the distance or time in between each other, their bond is never-ending.

While the song was written long before the COVID-19 pandemic, the message is as relevant as ever. The lyrics "Brothers we will always be, to eternity" are words to live by no matter what the case. Especially today, when there is so much chaos and uncertainty, we must band together and support one another.