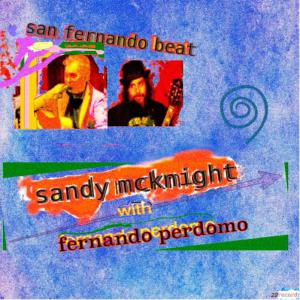 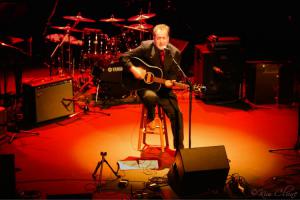 ASHEVILLE, NC, USA, May 19, 2020 /EINPresswire.com/ — Sandy McKnight is a songwriter, producer and performer. Fernando Perdomo is a multi-instrumentalist, producer and noted session player. Together, their individual talents are exponentially enhanced. Their ﬁrst product together is a six-song EP, “San Fernando Beat.” Fernando takes the infectious melodies that ﬂow freely from the proliﬁc McKnight and adds musical textures and his trademark energy, and the result is magical. PowerPop.com claims, “'San Fernando Beat' is clearly the best EP of the year.”

Before it was even released, one of the songs they recorded at Perdomo's Reseda Ranch Studio in LA made its way to legendary disc jockey Rodney Bingenheimer, who immediately played it on his inﬂuential national radio show. An auspicious start, for sure.

Says Sandy, “The idea behind San Fernando Beat was to bring together two top-tier songwriter/musicians (myself and 'Echo in the Canyon's' Fernando Perdomo) to interpret, or should I say, bash out my latest Power Pop songs. Beyond that, there was no specific theme, although there's a timely topicality to a few of the songs, while keeping the fun quotient high.”

Perdomo and McKnight had met a year earlier, while Sandy was recording his '70s homage “Wow and Flutter,” produced by Chris Silagyi of the band 20/20. A session at Reseda Ranch resulted in a connection between Sandy and Fernando, and in November 2019 they spent 2 productive days recording Sandy's songs in LA. Fernando was immediately blown away by Sandy's songwriting skills. They did 3 songs in those sessions, and decided to cut 3 more tunes bi-coastally (Perdomo works out of SoCal, McKnight is based in the Berkshires of western Massachusetts). Sandy cut the bass tracks, vocals and mixes for the 3 long distance songs at New York's Systems Two Studios, with Grammy-winning engineer Mike Marciano.

Sandy is a 40+year veteran of the music business. In the '70s, he was an in-demand bassist for live and studio work. He played with the New York City-based bands Numbers, The Coupons (with future Smithereens drummer Dennis Diken), Spitfire Boys, The Truants, and others. His dues-paying gigs included 2 years in the seminal “punk-funk” outfit Free and Easy, with future 5-time Downbeat poll-winner, trombonist Ray Anderson.

By the 1980's, Sandy was working with top-name artists as a session player, while continuing to be a part of successful NYC bands. Working in the studio with names like Todd Rundgren, Jean-Yves Labat (M. Frog), and legendary producer Joel Diamond, Sandy learned the ropes in the control room, and soon tried his hand at producing records. He honed his craft at famed Brooklyn studio Systems Two, and by the end of the decade was adept at producing recordings for all genres and budgets.

In the '90s, Sandy moved to the west coast, and opened Arrow Productions in Hollywood. There, he recorded diverse acts and up-and-coming singer/songwriters, along with composing music for film and television soundtracks. His solo career as an artist also took off in L.A., and he recorded his first solo album, “12XME,” which was released in 1992 to critical acclaim. It was in L.A. where he met a young singer/songwriter named Liv Cummins, who he developed and signed to his new indie label, 22 Records.

Sandy continued to write and record his own material as well, and soon was heard regularly on many TV shows and several film soundtracks. His 2003 release, “In Solitary,” was a production and songwriting tour-de-force. The ambitious, eclectic CD featured musicians like afro-cuban jazz piano great Oriente Lopez, Argentine-tango violinist Leonardo Suarez-Paz, rock drummer Dennis Diken, and other top players. Sandy has self-produced in a range of styles from latin-tinged jazz pop to British-flavored power pop to atmospheric strings-and-piano arrangements. “In Solitary” continues to find new fans and is regularly re-discovered on Spotify, iTunes, and other internet sites.

Along with his current release with Perdomo, “San Fernando Beat,” his bands Sandy McKnight & the Idea and Pop-Clique also have current releases. His box set, “How I Changed the World,” is a 66-song collection of songs he wrote between 1978-2010. Much of Sandy's music can be heard on Spotify, YouTube, etc.

In closing, Sandy has this to impart about SFB, and what he hopes to communicate to the listener. “I wouldn't call it a message, so much as a feeling. A joy, a strength…what rock music has always been about. The feeling you're listening to a friend tell you about his life, his loves, his attitude. And, since I'm just a bassist from Brooklyn, my ideas are fairly universal. The main reason for listening is that, hopefully, you've never heard these ideas expressed in quite this way. Writing songs conveys not only lyrical imagery…the melodies and chord changes, the arrangements, and the energy all contribute to making a unique statement.”