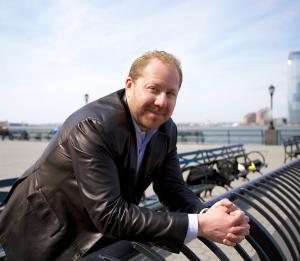 WHTB Podcast is available on Itunes, Spotify and Google Play. For information on being a guest on the show contact mrvish@mrvishmedia.com

NEW YORK, NY, UNITED STATES, May 30, 2020 /EINPresswire.com/ — Outspoken personal empowerment advocate known as Mr. Vish is inviting special guests for his new podcast program, “Who’s Holding the Bag?” The show, which premiered on March 17 of this year, promotes guests of entertainment, business, arts and sports renown who want to share their redemption and empowerment-over-adversity narratives in the testimonial-based interview format.

It’s the kind of storytelling the host himself knows firsthand. In 2013 Dimitry Vishnevetsky, an Oxford-educated then-34 year-old financial advisor, pled guilty to investment fraud in a Chicago federal courtroom. He was sentenced to six years in federal prison. Out of that experience Mr. Vishnevetsky became Mr. Vish. The latter is banking on his creative and reflective sides to make his newer, abbreviated moniker one he can promote not so much without the smear of scandal, but as a been-there-done-that rehabilitated and insightful version of the sports-car driving, jet-set traveling banking hotshot.

Enter “Who’s Holding the Bag?” While the podcast covers the requisite social issues like culture, lifestyle, politics, and economics, what gives the show its brash, fresh perspective is the integration of these topics with elements of the human condition most people are afraid to talk about. “Who’s Holding the Bag?” interrogates our assumptions about personal redemption over issues like addiction, incarceration, and temptation, among other no-no’s. Mr. Vish weaves these dialogues into his and his guests and, ultimately, our own larger life narratives in questions like, What really constitutes right from wrong? How might the justice system and some of our socio-cultural mores about good and bad better benefit from appreciating some of the subtleties and grays in personal decision-making, the things that aren’t always so concrete or black-and-white in life as they are in law? Marketed across a spectrum of demographics, from millennials to Gen Xers to Baby Boomers, “Who’s Holding the Bag?” is a weekly discussion about choices and decision-making in an often deceptive and uncertain world. These issues traverse all populations and ultimately make (or break) what we recognize as the human condition.

“Who’s Holding the Bag?” is available on Apple itunes, Spotify and Google Play. For information on being a guest on the show or for more information about Mr. Vish contact WHTB@therealmrvish.com