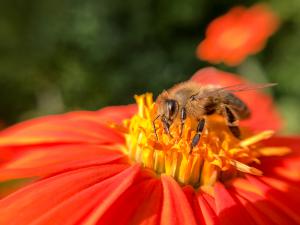 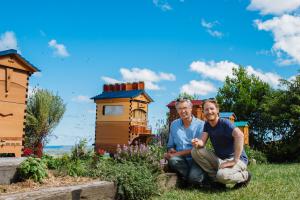 No life is sustainable without bees. Traditional beekeeping can be harsh on bees, even crushing them when honey is extracted. Bees are too important to lose. We wanted to design something that would make harvesting honey much gentler on bees. 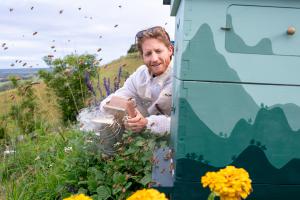 To Care for Ourselves, We Must Care for Nature. The inventor of the award-winning Flow Hive said that nature is sending us a message.

I want everyone to realise how interconnected humans and animals are. Over the past 15 years, global bee populations have declined rapidly, largely due to climate change, pollution and pesticides”
— Cedar Anderson

BYRON BAY, AUSTRALIA, June 4, 2020 /EINPresswire.com/ — The co-inventor of Flow Hive, an award-winning, beehive that’s gentler on the bees and which makes it possible to tap honey straight from the hive, today took the opportunity of this year’s World Environment Day to express that nature is sending us a message.

“The foods we eat, the air we breathe, the water we drink, and the climate that makes our planet habitable all come from nature. But the exciting thing is that there are so many tiny actions all of us can do to play a part in protecting bees and all the little pollinators that give us life,” said Cedar Anderson, co-inventor of the Flow Hive. “Protecting bees is not just the job of beekeepers — we all have a role, and it can start in our own backyards.”

“I want everyone to realise how interconnected we humans and animals are,” he continued. “Over the past 15 years, global bee populations have been declining rapidly, largely due to climate change, pollution and pesticides. This worrying trend continues today despite the fact that bees are responsible for pollinating 30 percent of the world’s food crops and 90 percent of the world’s plants. Without bees, human life as we know it wouldn’t be sustainable.”

Recent disruptions in our food chain of favourites like avocados and coffee are indicative of the dangers to pollinators, believes Flow, the company behind the Flow Hive. Without pollinators, we’d have to say goodbye to almonds, many vegetables, fruit and even beef supplies would be affected since cattle rely on pollinated plants for food. Many parts of the world have already become pollinator deserts, bereft of nectar and pollen because of habitat destruction, water pollution and the use of pesticides, insecticides and even herbicides (which can be toxic to bees and other pollinators). Basically, we all depend upon pollinators for the varied and healthful diets we enjoy.

There are also animals that eat bees themselves, including the rainbow bee-eater and other animals. A loss of bees for them would have negative effects that would reverberate up the food chain, posing a danger not just to them but to the animals which prey on them for food.

Seeing the environment breaking down is a clear message that we must take what could be our last opportunity to change our ways and start building it back up, not only for our sake but for that of other life on the planet.

“We simply cannot pretend it is business as usual in the face of an existential threat to our way of life. Flow asks that people around the world think of some of the creatures hardest hit, such as bees, by climate change, and whose demise will have particularly dire consequences on all life on this planet,” notes Cedar.

“We created the Flow Hive because we wanted to make beekeeping more accessible and sustainable,” explained Anderson, who spent years designing the Flow Hive with his father, Stuart Anderson, in Bryon Bay, Australia. “No life is sustainable without bees. Traditional beekeeping can be harsh on bees, even crushing them when honey is extracted. Bees are too important to lose. We wanted to design something that would make harvesting honey much gentler on bees.”

Along with countless backyards, acreages and farms, Flow Hive is being used on the rooftops of The Intercontinental Hotel and the Barclay Hotel in New York, the Ritz-Carlton in Charlotte, N.C., the Hague in the Netherlands, the Government House in Sydney, and the Parliament House in Australia’s capital of Canberra, and celebrities and chefs like Chris Hemsworth and Jamie Oliver are also picking up the Flow Hive buzz.

“We hope to encourage a new generation of beekeepers around the world who will bring with them enthusiasm, wonder, passion and purpose. Beekeeping increases our overall engagement with nature and reinforces our appreciation of how these magical creatures work,” Anderson said. “It’s time to wake up. To take notice. To raise our voices. It’s time to build back better than before for people and the planet. This World Environment Day, it’s time for nature.

ABOUT FLOW HIVE
Australia’s Flow Hive was launched in 2015 with a record-breaking, crowdfunding campaign which received support from tens of thousands of people around the world. Since then, Flow Hive has reached over 75,000 beekeepers across 130 countries. Using a unique Flow Frame of partly pre-formed honeycomb cells, Flow Hive is able to split cells vertically, letting honey flow down to a sealed trough while the bees remain undisturbed on the comb’s surface. It's so much easier for the beekeeper and so much gentler on the bees. For more information about Flow Hive, email media@honeyflow.com, call 02 88 800 774 or visit www.honeyflow.com.au.