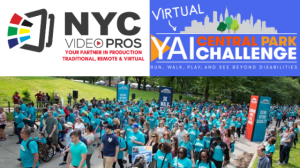 Working with YAI to shift to a virtual event & develop a broadcast we felt a special responsibility to craft a program that reflects the organization's ethos and celebrates members of the community.”
— Jason Cohen

NEW YORK, NEW YORK, USA, June 4, 2020 /EINPresswire.com/ — Despite challenging times, YAI, one of the region’s largest providers of support for people with disabilities, has sought to maintain its promise to the network of agencies that it supports and hold the Central Park Challenge on the first Saturday of June.

The Virtual Central Park Challenge, which will be hosted by Bill Ritter of WABC-TV’s Eyewitness News, is being completely virtually produced. The broadcast is set to feature a variety of Broadway performances as well as the organization's first Social DisDancing Party hosted by Hot 97's own DJ Enuff.

Producing the Central Park Challenge as a virtual event required a new perspective on the annual tradition: "Circumstances have allowed us to open our Central Park Challenge up to a bigger audience who can celebrate the resilience of our community,” said Jessica Stinchcomb, YAI’s Special Events Manager who organized the Virtual Central Park Challenge. “We are proud of how the community and our partners have stepped up to create an event that is just as – if not more – magical than before.”

With performances from Tony Award winners Kelli O’Hara, Lindsay Mendez, LaChanze, and Ali Stroker among others, and a live interview with Commissioner Victor Calise of the NYC Mayor's Office for People with Disabilities, the program aims to shine a bright light on this special community during what have been challenging times for everyone.

Crafting the event broadcast with an eye on retaining the essence and fabric of the traditional event was important to NYC Video Pros and Executive Producer Jason Cohen. "In working with YAI to shift to a virtual event and develop a broadcast we felt a special responsibility to develop a program that reflects the organization's ethos while maintaining the Central Park context, all while celebrating members of the community."

In light of the current climate, developing a live event broadcast that captures a variety of elements is a complex production. NYC Video Pros, Technical Producer, Frank Berman explains, "We’ve crafted an experience for the on-camera presenters, sponsors, back-stage crew and client stakeholders that is as robust and as integrated as any in-person, fully-on-site event. We’ve built a solid technical infrastructure that assures delivery of meaningful production value and integrates social media."