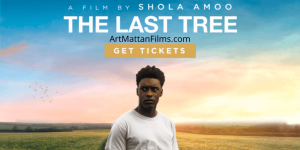 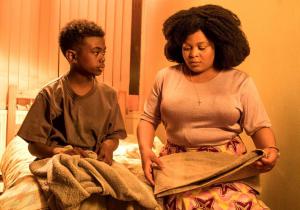 Young Femi with his mother (played by Gbemisola Ikumelo)

The Last Tree by Shola Amoo, “The work of a natural born filmmaker” (Nigel Andrews, Financial Times) scooped two wins for Best Supporting Actress and Most Promising Newcomer at the British Independent Film Award. Its Sundance 2019 World Premiere screening was followed by multiple festival screenings in the USA and Canada. The film’s June 26 Virtual Theatrical run will be followed by a digital and home-video release.

“An elliptical look at hard changes in a young man's life” (John DeFore, Hollywood Reporter), The Last Tree is the semi-autobiographical story of Femi (as a child played by newcomer Tai Golding), a British boy of Nigerian heritage who, after being fostered in rural Lincolnshire, moves to inner-city London to live with his birth mother. In his teens, Femi (Sam Adewunmi) is struggling with the culture and values of his new environment. Femi must decide which path to adulthood he wants to take, and what it means to be a young black man in London during the early 00s. Going back home to Nigeria with his mum to find his Nigerian roots will help adolescent Femi find grounding and hope for a better future.

With The Last Tree “Amoo presents a far more sensitive representation of the black British experience than is often seen on screen, challenging his audience to confront their own prejudices along the way." ~ Nikki Baughan, The List

Particularly impressive is the performance of BIFA winner Sam Adewunmi, who plays Femi as a young man.

“Newcomer Sam Adewunmi captures Femi's anger but also his loneliness – a desperate longing to forge his own path, but also to fit in with his family and friends.” ~ Hannah Woodhead, Little White Lies

“We can count on Adewunmi to reveal Femi's inner turmoil. It's a raw, emotionally resonant performance.” ~ Amon Warmann, CineVue

The Last Tree is Shola Amoo second feature length film after A Moving Image (2017). “As with his debut feature 'A Moving Image', a spikily insightful look at gentrification in Brixton, Amoo is always looking to subvert lazy cultural assumptions.” ~ Philip De Semlyen, Time Out