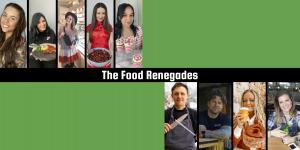 There is no group of chefs, home-cooks and bakers that total 112 million likes and 150 million views per month on any social platform in the world. We're about to change the food industry forever.”
— Evan Morgenstein

NEW YORK, NEW YORK, UNITED STATES, June 9, 2020 /EINPresswire.com/ — The largest group of social media chefs and home cooks have assembled under one roof at The Food Renegades (TikTok: @thefoodrenegades). Evan Morgenstein, President and CEO of several influencer, celebrity, and corporate consulting agencies, developed the concept for The Food Renegades while researching the food space on TikTok. Morgenstein saw an opportunity. "I have been blessed with recruiting some of the best athletes, celebrities, and influencers as clients. What I didn't see on TikTok was a group of amazing content creators in the food category, who worked as a team and focused on gorgeous and helpful videos encouraging home cooks to expand their abilities. The Food Renegades community is all-inclusive. Food is about family, memories, and love."

The power of the food industry in social media is clear. Adaptly recently reported, "As consumers continue to migrate online, so do CPG companies' advertising budgets. Reports indicated that 93% of businesses in the industry grew their digital marketing spend. Social platforms have become vehicles for establishing personal relationships with shoppers." The Food Renegades plan on filling a void left in the marketplace.

As the one-stop-shop for influence, consulting, and sales, The Food Renegades have created a stir with brands and agencies. "The ability for a company, large or small to leverage the power of each Food Renegade simultaneously, is game-changing," said Renegade Sonny Hurry (@thatdudecancook). "Two weeks before the pandemic, I was a personal chef in Aspen, Colorado, wondering what was I going to do with everything shut down. When Evan reached out to me, I had been on TikTok for three weeks and had about two-hundred-thousand followers. He saw something in me that I am not sure I saw in myself. Today, I am at over six-hundred-fifty-thousand followers in under three months and have deals with Dole, Smithfield, and HPE. I am just in awe of the power of this group of amazing people."

The Food Renegades have a unique proposition for its members and the industry; Morgenstein has made all of the chefs equity partners. The strength of this group lies in their shared success and desire to work hard for each other. Morgenstein, a former sports agent, knew this was the right thing to do, "I hate how celebrities, athletes, and influencers are treated by agencies that don't have a vision for everyone's success, just commissions. The Food Renegades has given me so much happiness because my team isn't just my incredible employees; it's now my partners who are always thinking about how we can be great! What a luxury."

The Food Renegades is comprised of the most incredible chefs and cooks on TikTok, including:

In addition to these amazing influencers, The Food Renegades is aggregating thousands of micro-influencers who cook into its funnel to deliver maximum impact for its customers. The ability of The Food Renegades to reach tens of millions of fans of food and cooking at home has enormous upside potential. "We are The Food Renegades. We are going to attack the market. There is no group of chefs, home-cooks and bakers that total 112 million likes and 150 million views per month on any social platform in the world. We're about to change the food industry forever. Our partners will endorse some brands, we will create our own licensed products, and we will build The Food Renegades into the first $100,000,000 company on TikTok," says Morgenstein.

Brands looking to reach a mostly female demographic in the United States will be hard-pressed to find a more cohesive unit to highlight, utilize, and create amazing recipes to spur sales. The Food Renegades are prepared to service companies all over the spectrum, from ingredients such as proteins, fruits, and veggies, to packaged consumer goods like hand sanitizers.

For more information or to set up a call to discuss the opportunities that exist with any of The Food Renegades or the entire team, contact Evan Morgenstein at evan@celebexperts.com or Christina Brennan VP, New Business Development at christina@celebexperts.com. Visit the company site www.thedigitalrenegades.com/the-food-renegades.