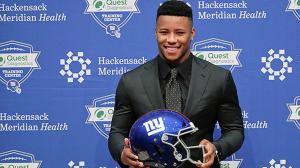 Pro Football Focus honored Saquon for his 2018 efforts, ranking him the third highest-graded rookie running back of the decade.

LOS ANGELES, CA, UNITED STATES, June 26, 2020 /EINPresswire.com/ — New York Giants running back, Saquon Barkley, burst onto the scene in 2018 and became one of the highest-graded prospects over the last decade at his position. Barkley earned the AP Offensive Rookie of the Year Award, the Pepsi Rookie of the Year Award, the FedEx Ground Player of the Year Award, and his inaugural Pro Bowl nod during his rookie season. Having racked up 1,307 rushing yards and a league-high 2,028 yards from scrimmage in Barkley’s rookie season, it was clear Dave Gettleman made a great decision in drafting Barkley at No. 2 overall. And recently, Pro Football Focus honored Saquon for his 2018 efforts, ranking him the third highest-graded rookie running back of the decade.

The Washington Redskins Alfred Morris was rated fifth for a rookie behind Eric Dickerson and George Rogers for his impressive 2012 perforce in which he rushed for 1,613 yards and 13 touchdowns, the third highest ever yardage total in NFL history. Impressive for a sixth-round pick out of Florida Atlantic and 173rd overall. Eddie Lacy is right behind Morris, who was picked out of Alabama by the Green Bay Packers in the second round in 2013. As a rookie, Lacy amassed 1,435 yards from scrimmage with 11 total touchdowns.

Barkley is third on the list despite having racked up a league-leading 2,023 scrimmage yards and scoring 15 total touchdowns. Nevertheless, the ranking scale of Pro Football Focus isn't solely based on the player 's fierce nature. In the 2010s, running backs dropped out of fashion in the NFL draft. Barkley became the most recruited running back of the decade, getting No. 2 overall in 2018. Trent Richardson (No. 3, Cleveland, 2012), Ezekiel Elliott (No. 4, Dallas, 2016) and Leonard Fournette (No. 4, Jacksonville, 2017) are other running backs selected in the Top 5 of the decade.

Kansas City's Kareem Hunt, a 2017 three-round selection from Toledo, is behind Barkley. Hunt finished third in the NFL in rushing with 1,327 yards and had 1,782 total yards from scrimmage with 11 total scores. By 2015, Richardson was out of football, but the other two are the staples of the offenses on their teams.

It is a no brainer that Saquon is ranked so highly, he has also been projected to win the 2020 NFL MVP Award. The Giants have a chance to feature Barkley more effectively this season, according to NFL Network analyst Steve Mariucci. As the former NFL head coach recently proposed on NFL Total Access it might contribute to a potential MVP campaign. “Six running backs have made MVP in the last 25 years, but they did something special like rush for 2,000 yards or break the rushing record like LT did with 28 rushing touchdowns,” Mariucci said. Barkley provides a rare mix of creativity that is both receiving and running. He is a good check-down option, managing 25-30 touches a game. The Giants have in for Dallas Cowboys head coach Jason Garrett, a potential offensive coordinator. Barkley understands how Garrett wants to execute his system after having played for two seasons against the Cowboys and looks forward to participating in the system.